Today the International Turkic Academy hosted a meeting dedicated to the 750th anniversary of the Golden Horde establishment.

The head of the Academy, Darkhan Kydyrali, first of all welcomed a special delegation from Mongolia and showed them the Turkic Museum. Then, the guests visited the Turkic Library and saw the Book Fair dedicated to the Academy’s Mongolian books.

It is worth noting that the International Turkic Academy has been carrying out archaeological excavations in Mongolia for four years and has implemented a number of joint projects. Representatives of the Mongolian Delegation appreciated results of these works.

The head of the Turkic Academy D. Kydyrali introduced the guests and briefly told about activities dedicated to the 750th anniversary of the Golden Horde. At the same time, he emphasized that relations between two countries are intensifying. “Our annual Humanities Forum “The Great Steppe” was attended by the first President of Mongolia, Mr. Ochirbat. We showed him the mausoleum of Jochi Khan. Recently the Prime Minister of Mongolia visited us, and now the Deputy Prime Minister is our guest,” he said.

“The history tells that our ancestors settled on these great steppes and established here great hordes. And now we celebrate the 750th anniversary of one of those most powerful states the Golden Horde. The Head of State made the corresponding decision and instructed the Government. We held a series of events. We are planning to engage our scientists, experts and scholars of neighboring countries in large-scale research and conduct excavations. We also aim at promoting the history of the Golden Horde through carrying out scientific and practical conferences in other countries,” the Deputy Prime Minister said.

Berdybek Saparbayev noted that the International Turkic Academy plays an important role in this direction. “The Turkic Academy includes four different states apart from us. Among them are Azerbaijan, Turkey, Kyrgyzstan, and Uzbekistan intends to become Academy’s member state. Hungary has an observer status since last year. We are not a stranger to Mongolia, our history is closely related. Therefore, I invite you to become an observer of the Academy, Mr. Enkhtuvshin,” said Mr. Saparbayev.

In addition, the Deputy Prime Minister emphasized that within the 750th anniversary of the Golden Horde special attention will be paid to the tourism development in the Ulytau region, where the Jochi Khan Mausoleum is located. “The unique and only historical monument for well-known Genghis Khan and his children is located in the Ulytau region of Kazakhstan. In this regard, we should improve the tourist potential of the region,” he noted.

In turn, Deputy Prime Minister of Mongolia Mr. O. Enkhtuvshin expressed his confidence that the cooperation of two neighboring countries will continue to strengthen.

“I am glad that bilateral relations are developing dynamically. Descendants of our Genghis ancestry lived on the land of Kazakhstan. In particular, we know that the mausoleum of his first son Jochi Khan is here. I highly appreciate your great efforts to celebrate the 750th anniversary of the Golden Horde, to protect the Jochi Khan Mausoleum, to make it a tourist center and show it to the world. I hope that our country will also support it,” said O. Enkhtuvshin.

In turn, he said that Mongolia would celebrate the 800th anniversary of Karakorum. “We plan to celebrate the 800th anniversary of Karakorum in August of the next year.  The International Turkic Academy has good opportunity to take part in this celebration, because it is a scientific institution on the one hand and the international organization on the other. So I hope that in cooperation with such influential organization, we will hold these events on a high level. We are grateful to the International Turkic Academy for cooperation and fundamental work with the Mongolian Academy of Sciences, National Museum, Archeology Institute, Archives administration since 2014,” said Deputy Prime Minister of Mongolia.

President of the International Turkic Academy Darkhan Kydyrali thanked the Deputy Prime Minister of Mongolia for excellent preservation of valuable monuments belonging to ancient Turkic era, and awarded the guest with the Academy’s Wilhelm Thomsen Medal. In addition, he traditionally presented him national robe (chapan) and whip.

Darkhan Kuandykuly announced that the Turkic Academy will celebrate the 1300th anniversary of the Mongolian Tonykok monument in the framework of the UNESCO next year.

The prominent statesman and public figure Myrzatay Zholdasbekov said that relations between two countries, established in the past, have a great impact on our history.

Mr. Adil Akhmetov, a member of the Council of Elders of the Turkic Council, examined Kazakh-Mongolian dictionaries and said that there was a lot of similar words: “This is evidence of our peoples kinship,” said Adil Kurmanzhanuly. Famous scholar Smagul Orazak also noticed that Turkic and Mongolian people are related.

Summing up the meeting, the head of the Academy expressed his gratitude to the guests. 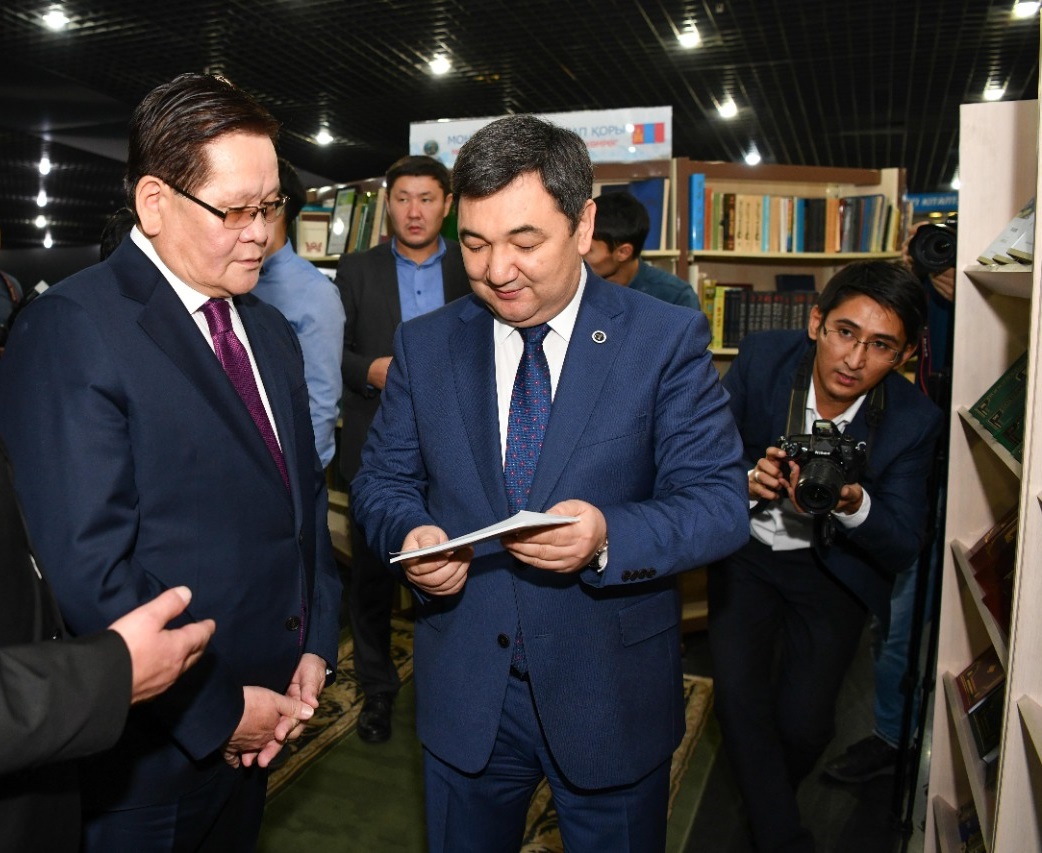 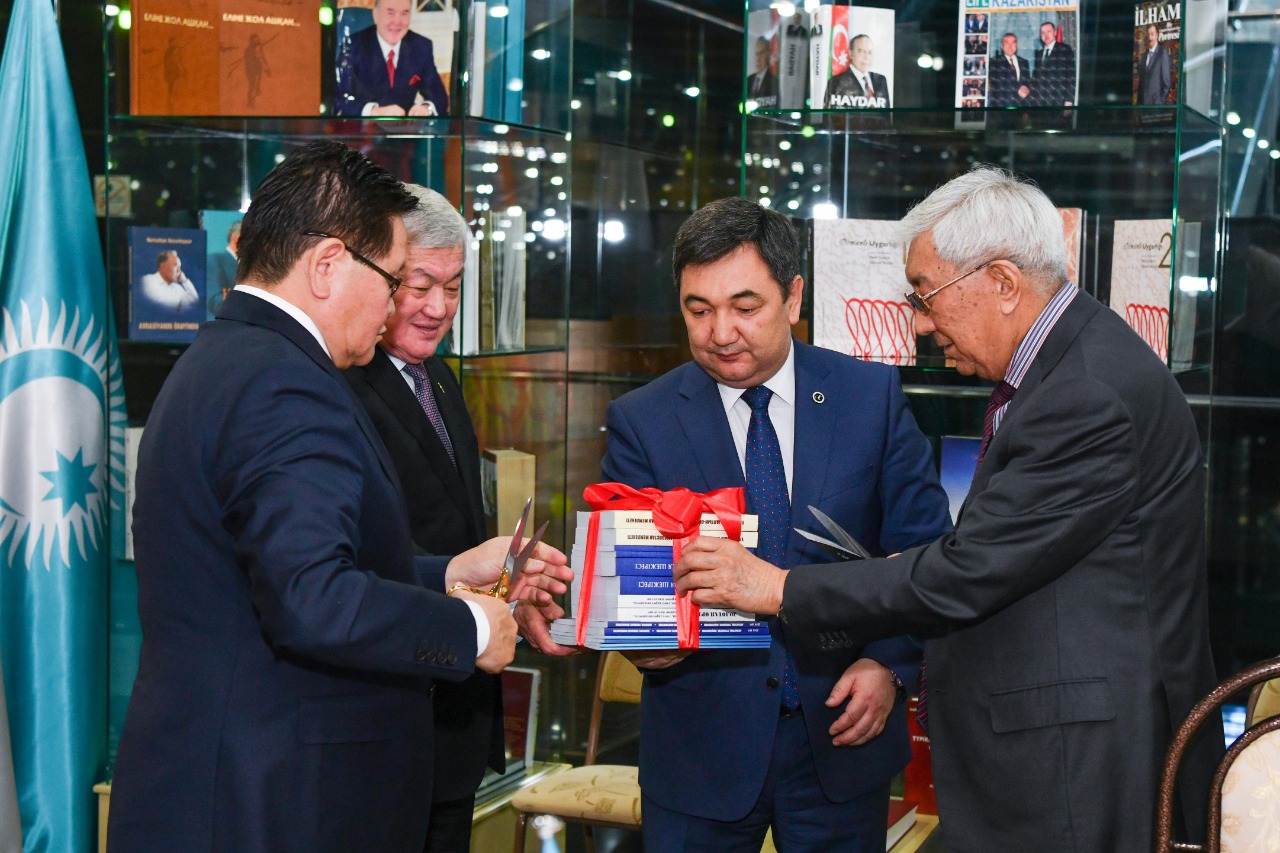 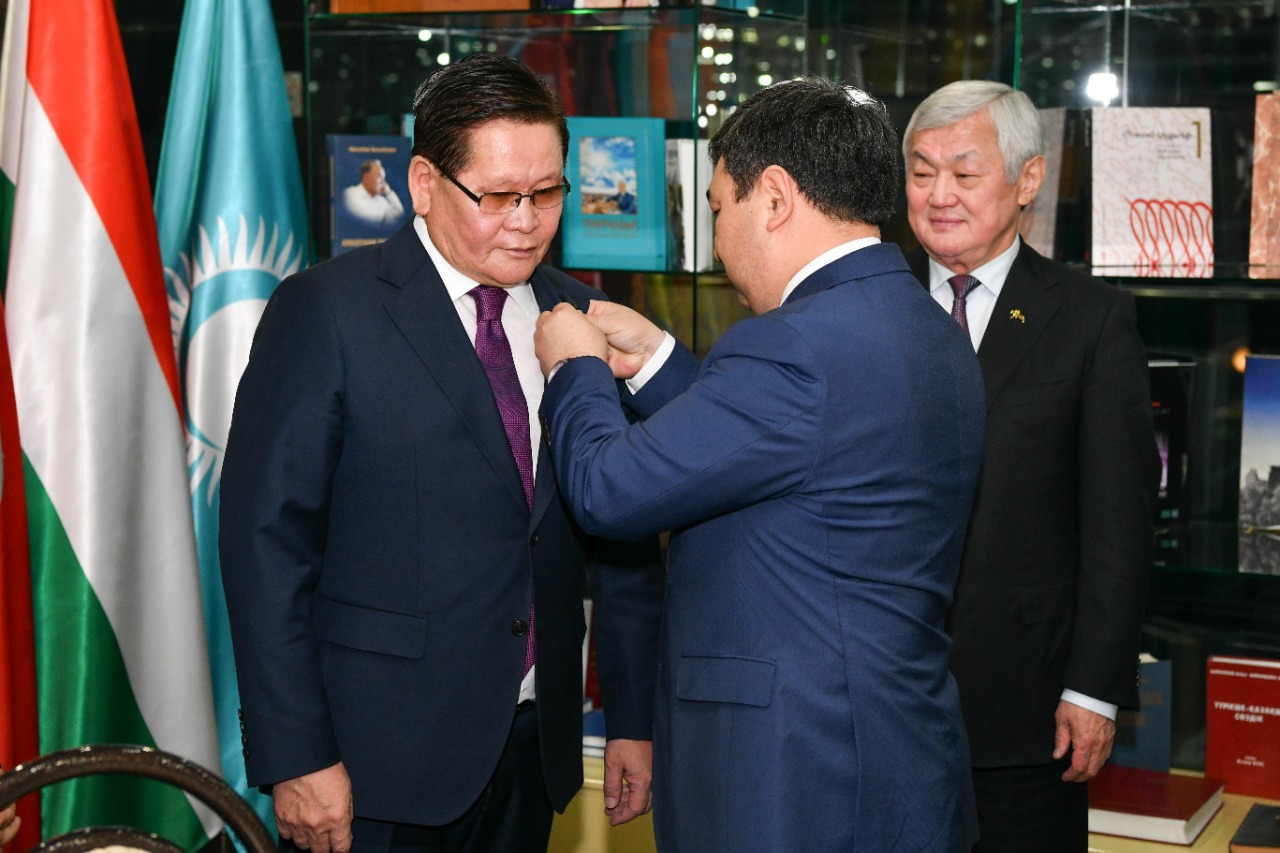 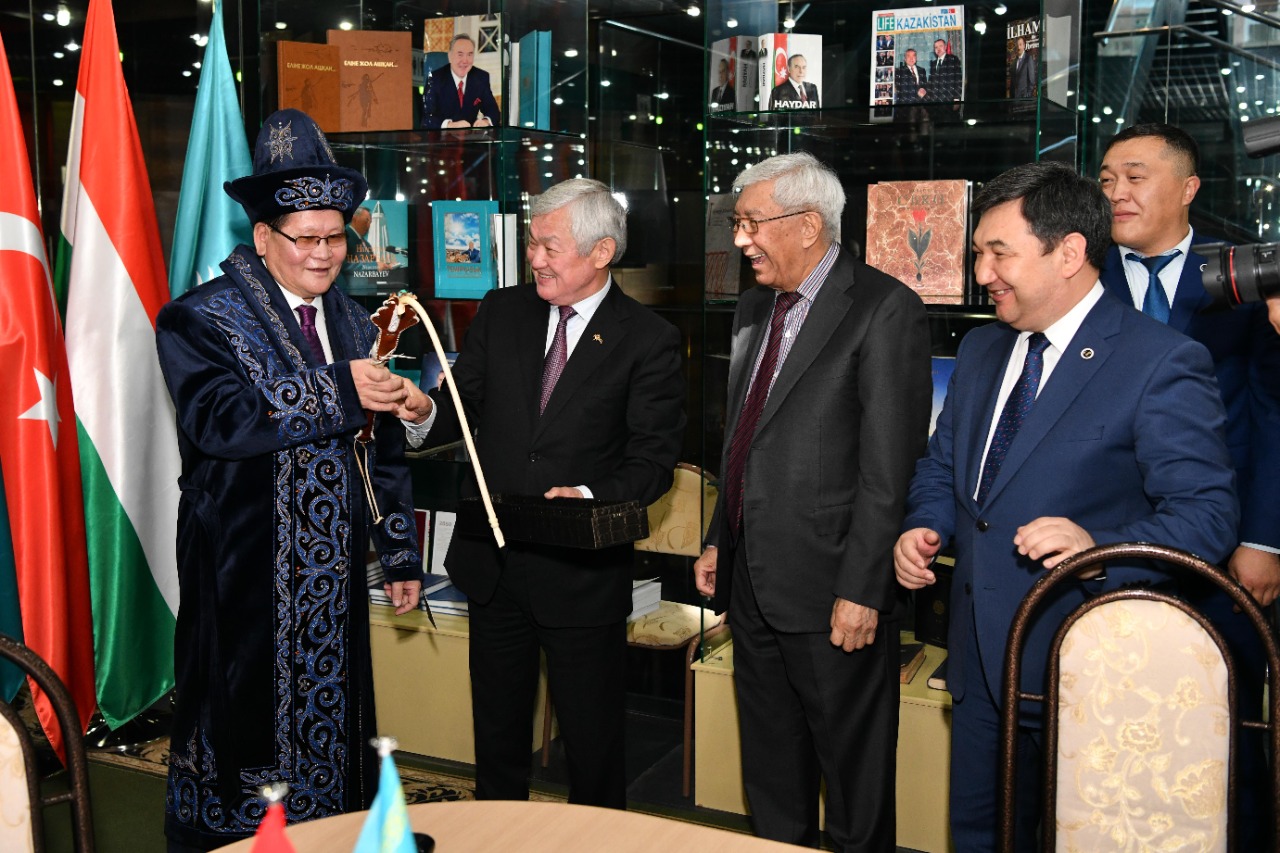 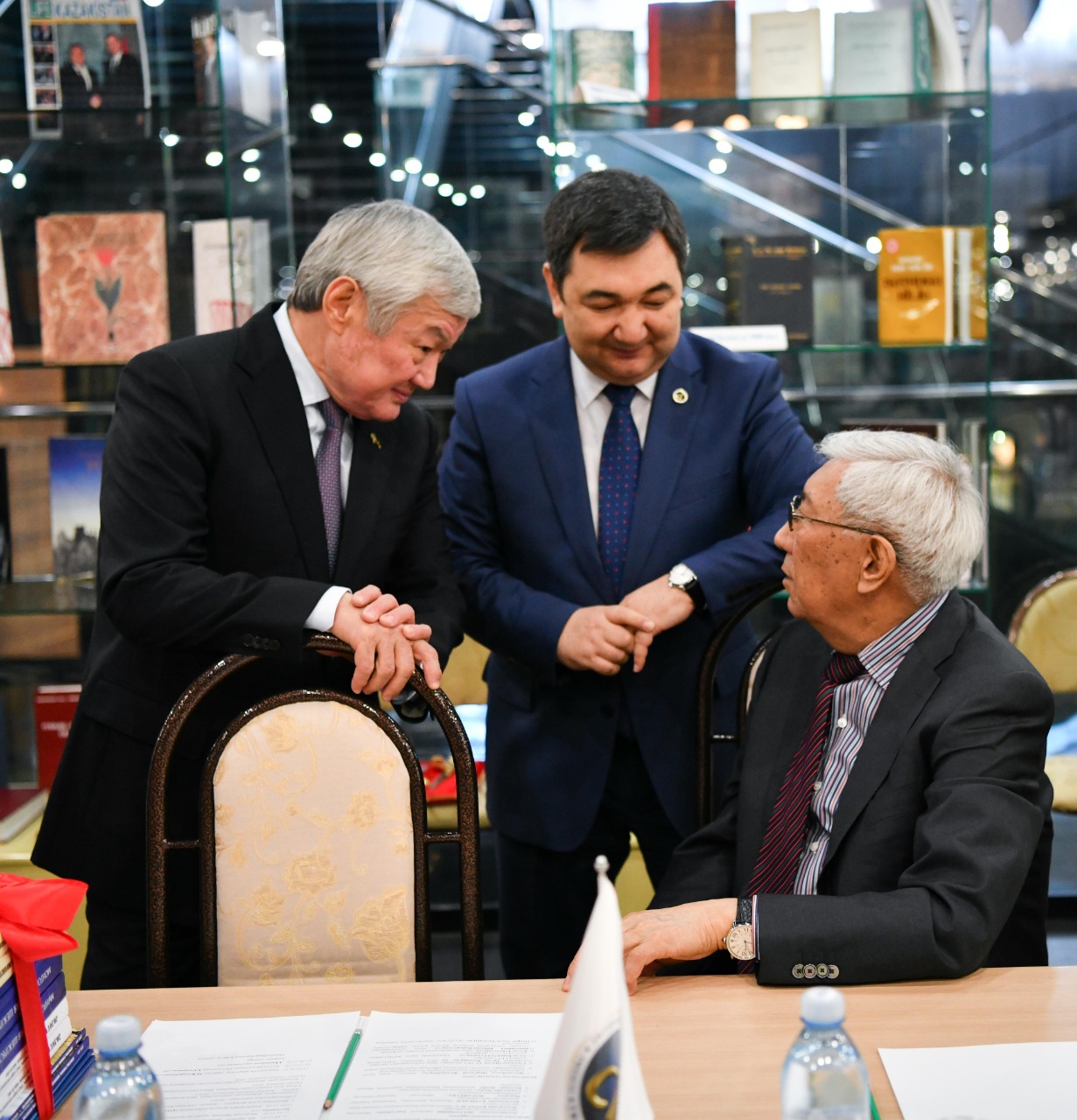