Today, within the framework of celebration of the Day of the First President of the Republic of Kazakhstan, the International Turkic Academy jointly with the Assembly of People of Kazakhstan held a special event titled “Outstanding figures of the Turkic world” in the city of Nur-Sultan. During the meeting, a presentation of a new book on “Nazarbayev’s Leadership: the Rise of the Great Steppe” by Turkish famous political scientist, Professor Kursad Zorlu was held. 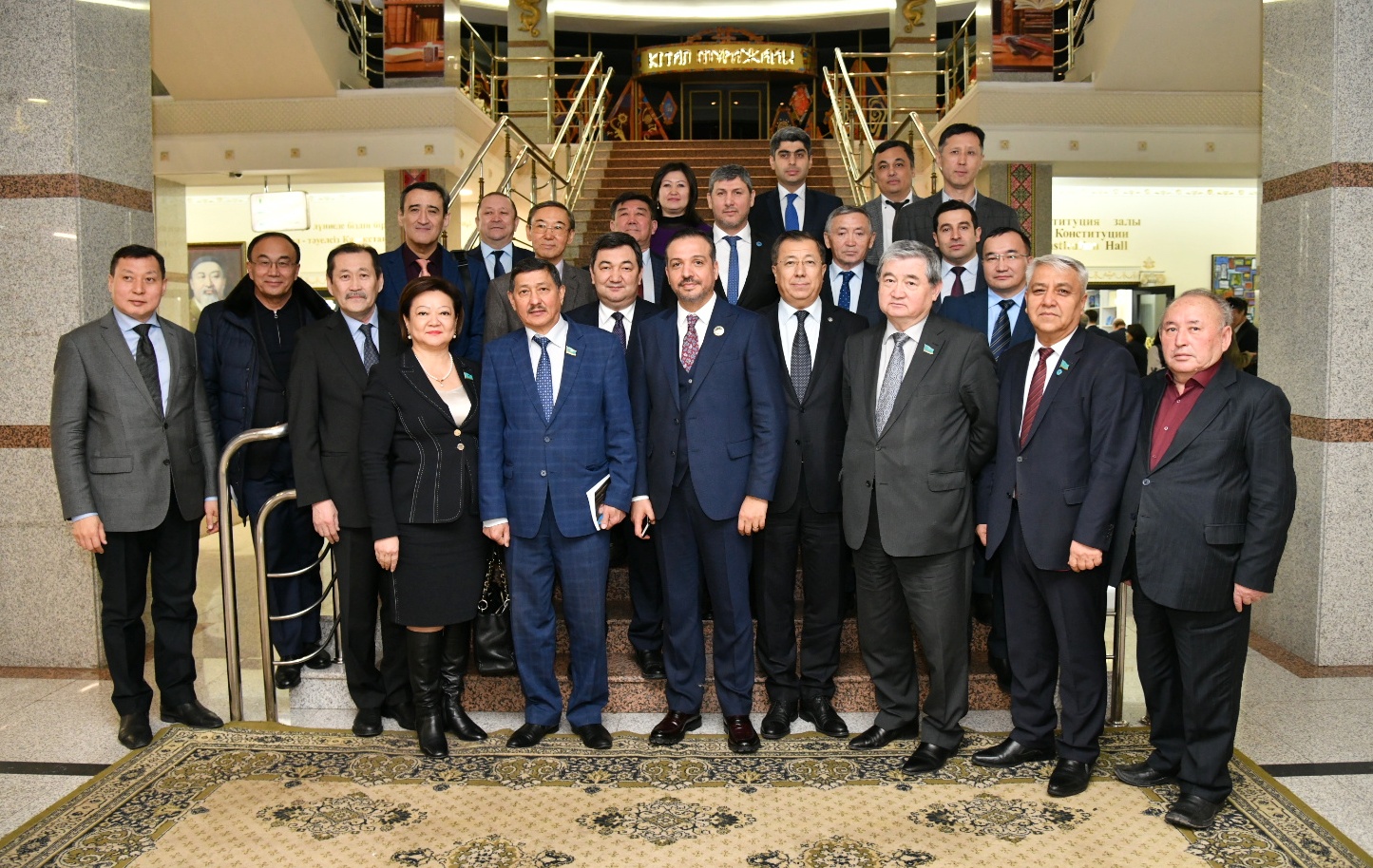 President of the International Turkic Academy Darkhan Kydyrali, Deputy Chairman of the Assembly of People of Kazakhstan Zhanseit Tuimebayev, Ambassador Extraordinary and Plenipotentiary of Mongolia to Kazakhstan Luvsan Batulga, state and public figures, Parliament deputies, representatives of diplomatic missions, heads of scientific and educational institutions, well-known scientists and intellectuals participated in the meeting that took place in the National Academic Library.

Hosting the event, head of the Academy Darkhan Kydyrali emphasized the role of the First President of the Republic of Kazakhstan – Leader of the Nation N.Nazarbayev in establishing the Assembly of Peoples of Kazakhstan and the International Turkic Academy and drew attention to peculiarities of the new book. “It should be noted that even though this work is written in Turkish, the first version of the book will be published and presented in Kazakh language. The book deeply analyzes Leadership feature of Elbasy, his way of governing country; it can be used as a textbook in higher educational institutions,” he said.

After that the head of the Academy gave the floor to the Deputy Chairman of the Assembly of People of Kazakhstan – the Head of the Secretariat of the Assembly of People of Kazakhstan Zhanseit Tuimebayev. In his speech, Zhanseit Kanseituly noted the role of the First President in the unity of the Turkic world. He also emphasized extensive work of Elbasy in developing young state, managing vast territory and different nations. “Creating a state and forming it as a powerful country and transmitting it to the next generation is beyond the capacity of every leader. And in this regard, we are lucky,” said the Assembly Deputy Chairman. According to him, contribution of the First President of Kazakhstan as a politician, activist and spiritual leader is greatly appreciated in the international arena. “He has initiated establishment of many international organizations. President’s work in the integration of the Turkic world should also be noted. Today, we see that intellectuals and statesmen of the Turkic world in many complicated issues rely on the Leader of the Nation, considering him a leader of the Turkic world,” Mr. Tuimebayev noted.

Also, Zhanseit Kanseituly appreciated the work of the International Turkic Academy and said that the Academy implemented “President’s purpose to promote the heritage of the Turkic world to the world”. In this regard, he noted that the new edition on “Nazarbayev’s Leadership: the Rise of the Great Steppe”, published by the Turkic Academy, is a valuable publication that studied president’s leadership in all aspects. In conclusion, he awarded “Meirim” medal to the author of the book, Kursad Zorlu.

Then the deputy of the Majilis Sauatbek Abdrakhmanov and the Senate deputy Dinar Noketayeva held the ceremony of presentation of the book on “Nazarbayev’s Leadership: the Rise of the Great Steppe” by Professor Kursad Zorlu. 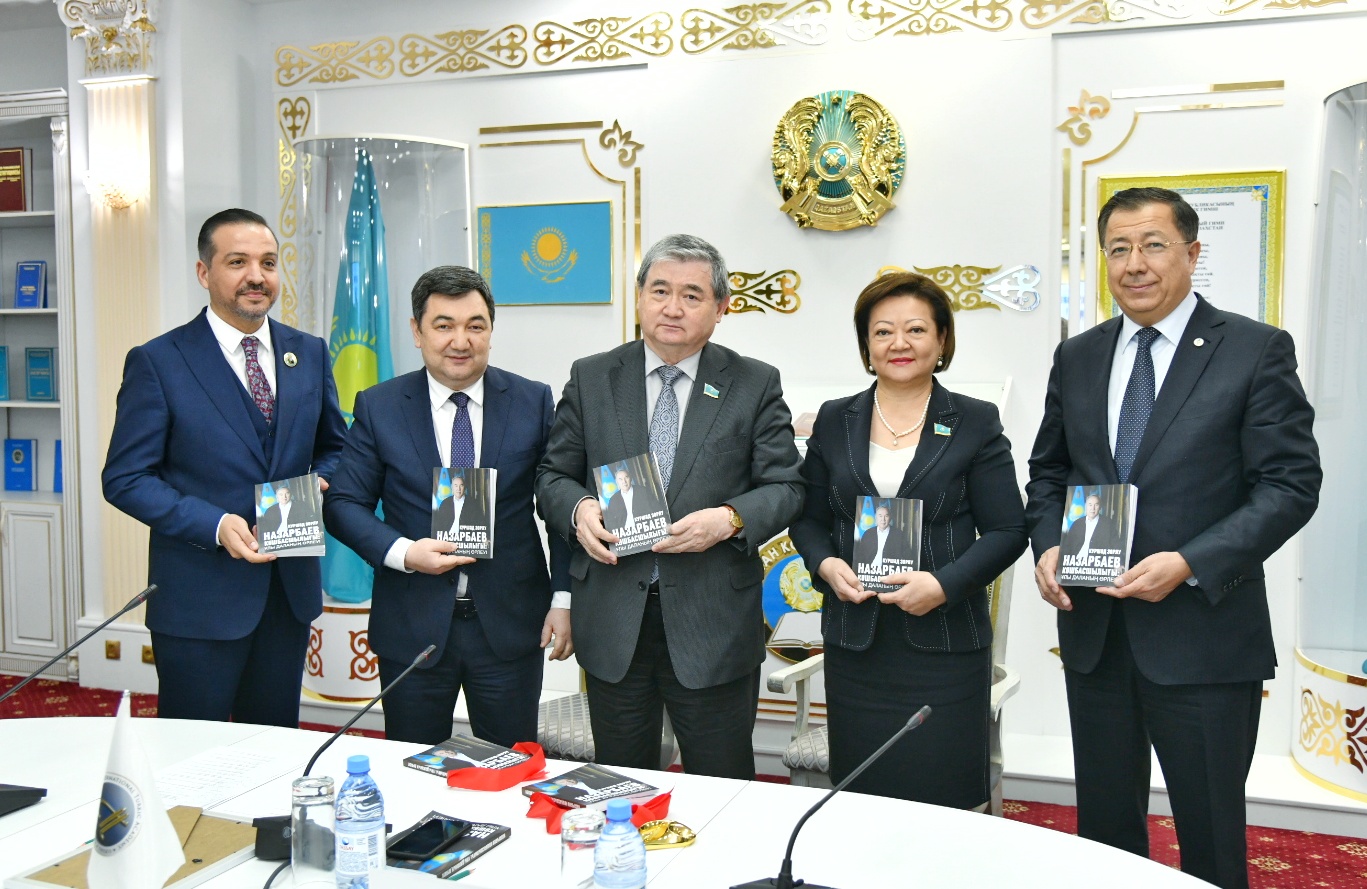 The author of the book, well-known political scientist, Kursad Zorlu greeted Kazakh people on behalf of Turkish people: “Both peoples have common proverb that “There is no result without unity”. That’s why achievements are more obvious if we are together. The Turkic world is glad to see Kazakhstan’s growth and becoming one of well-developed countries in the short term. At the same time, a number of people in Turkey who can speak Kazakh is increasing since gaining independence by Kazakhstan. All this is a result of the President’s work,” said Kursad Zorlu. He said that his work was a result of twenty years of research. “During the study, I analyzed all important decisions of the President Nursultan Nazarbayev over the past 30 years and constantly monitored the outcome of news and changes,” he said. The author also thanked the Head of the Academy Darkhan Kydyrali and the Deputy Chairman of the Assembly Zhanseit Tuimebayev for supporting the book’s publication.

In his turn, Majilis deputy Fakhriddin Karataev noted that the new book was a scientific work, prepared with the use of advanced methods of political science and sociology. “The author, Prof. Kursad Zorlu thoroughly analyzed scientific basis of Nazarbayev’s phenomenon. He also gave good expert review of president’s contribution to gathering Turkic people.”

Professor of the Nazarbayev University Uli Shamiloglu said that he was born in the United States, but “did not even think that the Turkic world would reunite. However, dreams that we couldn’t realize came true, and Turkic peoples became a united community. And we all know that this is a great merit of Nursultan Nazarbayev.” 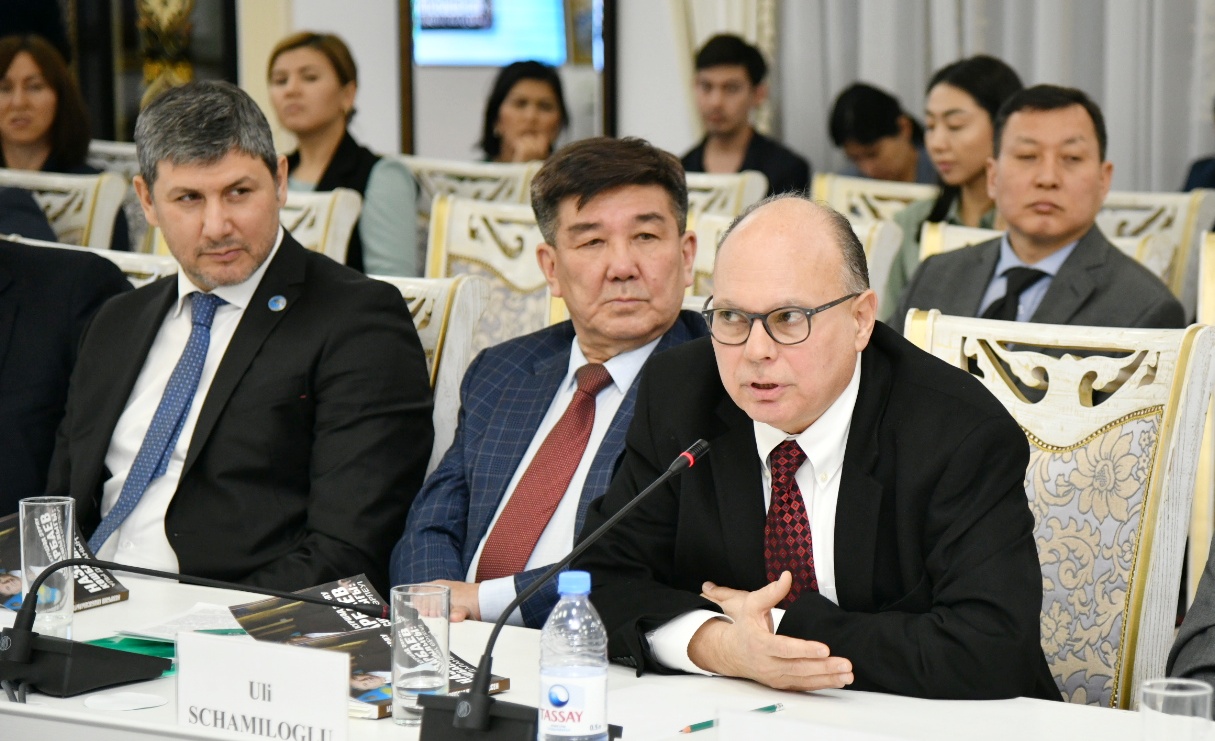 The famous Kyrgyz scholar, Turkologist Kadyrali Konkobayev described the new work of Professor Kursad Zorlu as “academic study”. According to him, the author of the book showed that governing state should be entrusted to really talented leader. “All achievements of Kazakhstan are a clear result of Nursultan Nazarbayev’s work,” K. Konkobaev said.

Sauitbek Abdrakhmanov, another member of Majilis of the Kazakh Parliament, said: “This is the first union of Turkic peoples after the era of Turkic Khanate. We have reached this due to Nursultan Nazarbayev”. He appreciated the author’s work, who could accurately describe “Elbasy’s leadership features, peacekeeping activity, contribution to the Turkic world unity, fundamental activities within the country”.

Leading researcher at the Library of the First President – Leader of the Nation, Gaziz Telebayev said that it was desirable to have such deep and concrete scientific researches about the Head of State. “In my opinion, this is the first scientific study that properly combines both a theory and practice. I support the use of textbooks in universities,” he said. Moreover, the representative of the Library proposed to translate the new edition into other Turkic languages.

Another representative of the Assembly of People of Kazakhstan Asker Piriyev shared his view that “we can build confidence in younger generation for a perfect future by showing immense work of the Head of State”.

It should be noted that Professor Kursad Zorlu has been comparing N.A. Nazarbayev’s activity with the world’s leading models for many years. In this regard, the author’s articles are published in Kazakhstani editions. The book also analyzes the role of the Head of State in strengthening the Turkic world’s cooperation.

The new book, published by the International Turkic Academy, is a study that has deeply analyzed the way of establishing state, model of governance and leadership of the First President of the Republic of Kazakhstan Nursultan Nazarbayev. Recall that the author of the book is an experienced and competent scientist in real political science.

At the end of the event, the Head of the Academy awarded the Academy’s Certificate of Appreciation to Prof. Kursad Zorlu. 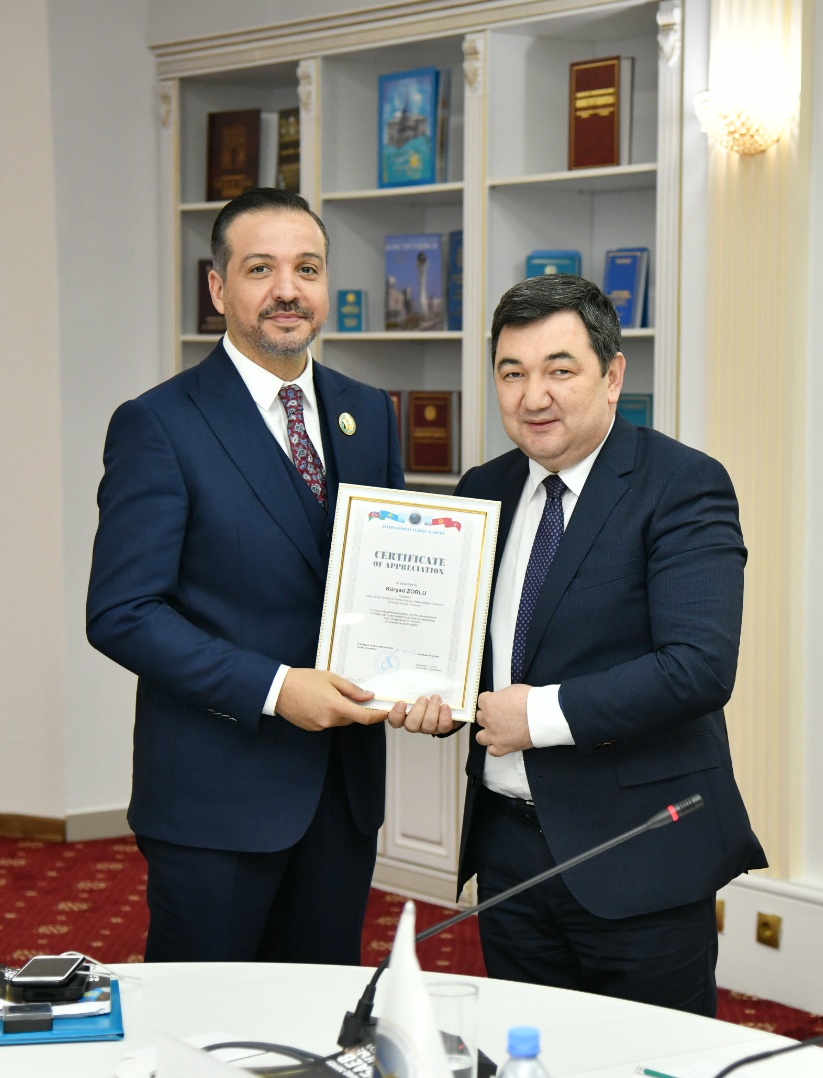